Antikatechon: "The Sanctum of Saturation" CD reviewed on "Darkroom Magazine"

Antikatechon: "The Sanctum of Saturation" CD reviewed on "Side-Line"

Background/Info: Italian artist Davide Del Col is back on track unleashing the fifth solo-album of his sonic brainchild Antikatechon.

Content: This new opus features only 2 long duration cuts. The artists takes you away in a shimmering sound universe featuring a truly arsenal of noises and rough sound treatments. There’s a slow progression operating. The second cut is more noisy-like and accomplished with a kind of Eastern-like guitar playing.
+ + + : There’s a great, overwhelming sound wave running through this work. The progressive evolution of the tracks ends into a cool electronic sequence at “The Stations Of Servitude”. The next cut “The Sanctum Of Saturation” sounds more minimal-like, but here again Antikatechon brings a fascinating input by this mysterious eastern-like atmosphere.
- - - : Both cuts are easily going over the 20 minutes, which also create some monotonous passages.
Conclusion: Antikatechon remains a fascinating project, which sounds as a solid sonic bridge between dark-ambient and cinematographic music.
Best songs: “The Sanctum Of Saturation”
Rate: (7½).
Pubblicato da davide del col a 04:00 Nessun commento: 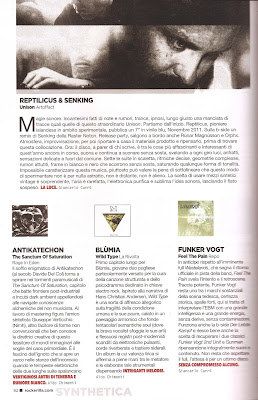 Contact me for orders and infos about shipping costs and methods of payment.

Antikatechon: "The Sanctum of Saturation" CD reviewed on "Igloo Magazine"

Italy has an honorable tradition in the development of industrial dark ambient music, from past to nowadays. Eibon has forged the style for this country with Amon, Never Known, Nimh rapidly followed by Cold Meat Industry with the release of materials from Vestigial, New Risen Throne. Polish based label Rage in Eden actively carries on the torch of dark ambient acts from Italy, notably with Nimh, Antikatechon and Neuestrasse. Albums by Antikatechon have been occasionally reviewed by Igloo, his recommended effort in collaboration with Nimh titled Out Hunting For Teeth as well as Woe Is The Reward and I Feel Nothing But Repulsion. Antikatechon typical style is characterized by a cathedral of ominous drones, layered textures which interact with bleak noises sometimes punctuated by heavenly melodies in a minor key mode.

This new album explores the most minimalist, industrial and droning direction of Antikatechon’s music, melodious arrangements are far more discreet here than it was before. The two epic pieces are focused on a dense cascade of abrasive drone vibes, shrouded in utter darkness. This harsh wall of sounds let escaping sorrowing dreamscapes of elegiac beauty but you have to be fully concentrated to catch those submerged melodious counterpoints. Antikatechon keeps maintaining darkly meditative moods at high level with blissful then heavily charged thundering ambiences. Some buzzing electric chords reveal a slight experimental post-rock flavor.

A really interesting release which admits a cross between the turbulent noisy works of Theologian, IRM, Brighter Death Now and the quiet, mercurial drone ecstasies of Tim Hecker, Windy & Carl, and darkened contemplative textures of Atrium Carceri or Desiderii Marginis. An original musical balance and convincing soundscaping dialogue which challenges things a little in the shifting ambient music galaxy.